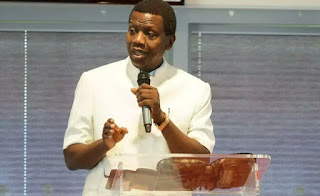 The General Overseer of the Redeemed Christian Church of God, Pastor E.A Adeboye, today in his sermon at the Church’s headquarters at Redemption Camp, told his members why they shouldn’t marry girls from Facebook.

Nigerians are already calling out the Pastor and his church for this.

The Pastor also dropped a controversial sermon last year, where he asked members not to marry women who can’t cook and also can’t pray for one hour.